In February 2009, I attended the Asian Internet operator's conference in Manila. Once the conference was over, I wanted to do something special in before going back home: climb to one of the many volcanoes in the Philippines. At first I was interested in Mt. Mayon. However, it turned out that this could not be done with the limited time I had, so I chose to go to the infamous Mt. Pinatubo instead.

There are several guides that can take you to Mt. Pinatubo. I used e-Philippines Adventure Travel and I was generally very pleased with their service. The trip started from congested Manila. There were plenty of "Jeepneys", unique conversions of Jeeps to public transports. Even if Mt. Pinatubo is only 80 kilometers from Manila, the traffic and road conditions can easily lead to spending three hours just to get to drop-off point. 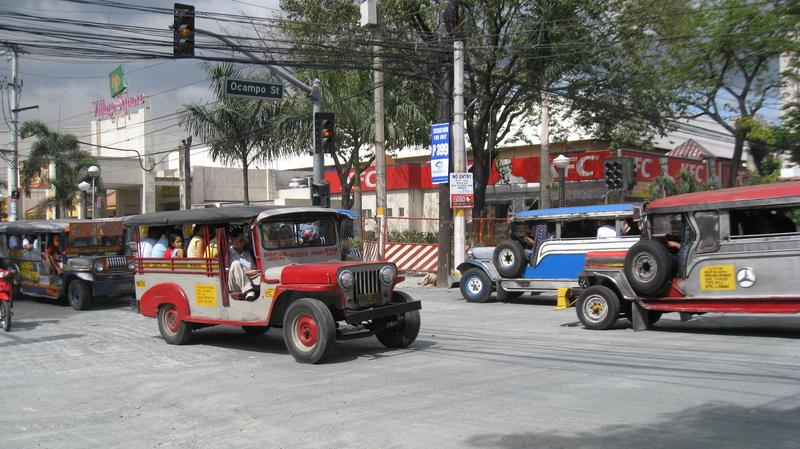 The mountain is within the area of the Crow Military Reservation. This is one of the reasons why you need a guide to lead you to the mountain; a permission is required and an permit for an overnight stay can be particularly hard to acquire. But I was lucky to get the necessary permits, thanks to the friendly Philippines army folks. 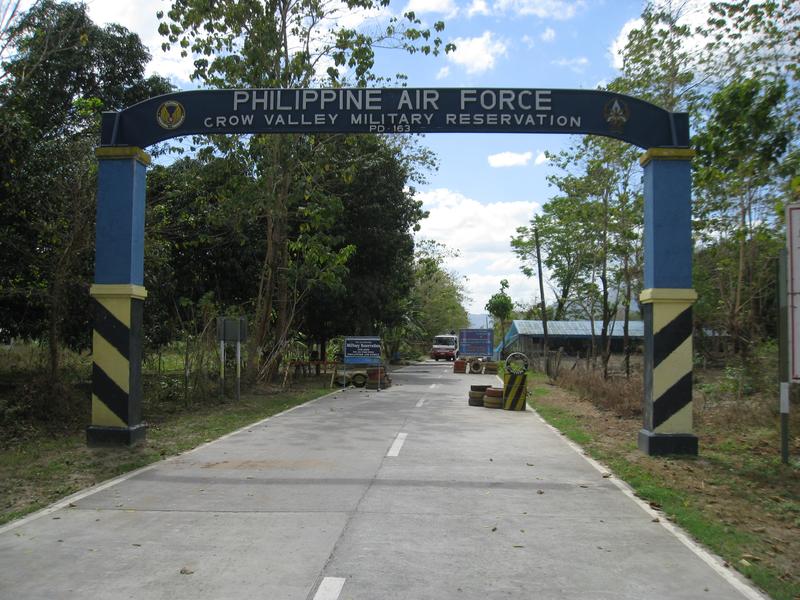 Once we entered the military reservation, we boarded 4x4 vehicles to carry us nearer the mountain from the end of the road. The area around Pinatubo is a mixture of hills, rivers, and sand fields. We must have crossed the same river 50 times going towards the mountain. 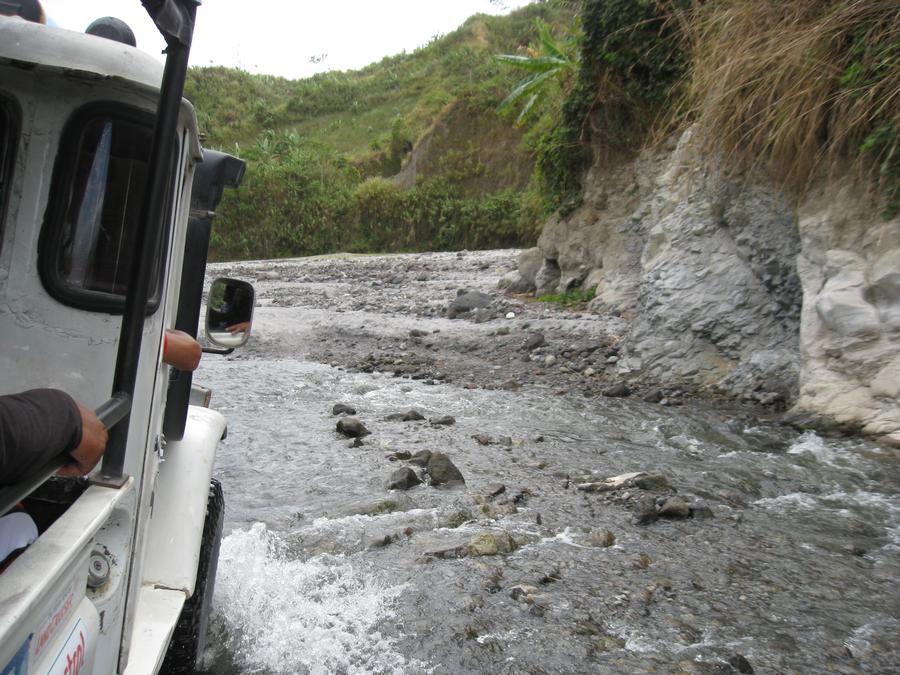 Eventually the path became too narrow for our vehicle and we had to start walking. There are several paths to get to the crater. We followed the river, which was about a three hour walk. On return trip we we used a shortcut that takes under an hour. 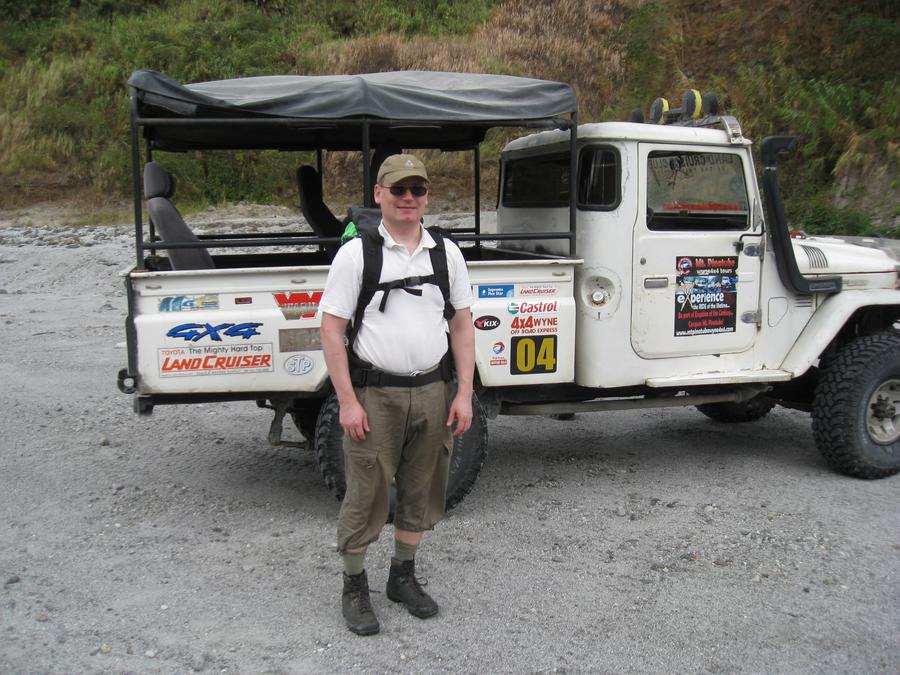 The hills around the river consisted mostly of packed sand and ash. This is an entirely new environment and rains can easily cause lahar flows, slides, or even the collapse of parts of the mountain. 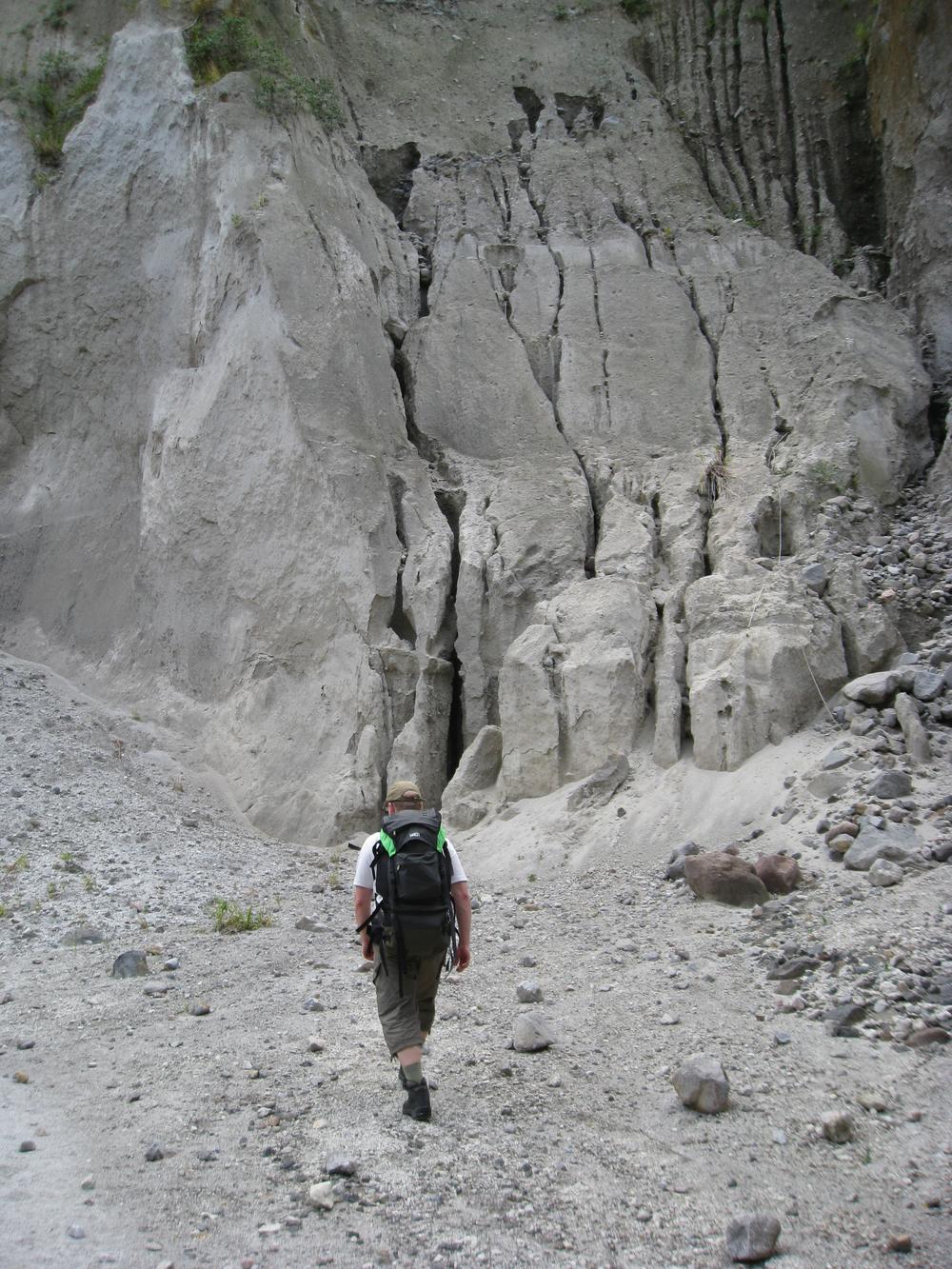 It is hard to understand that these pillars of sand are still standing. 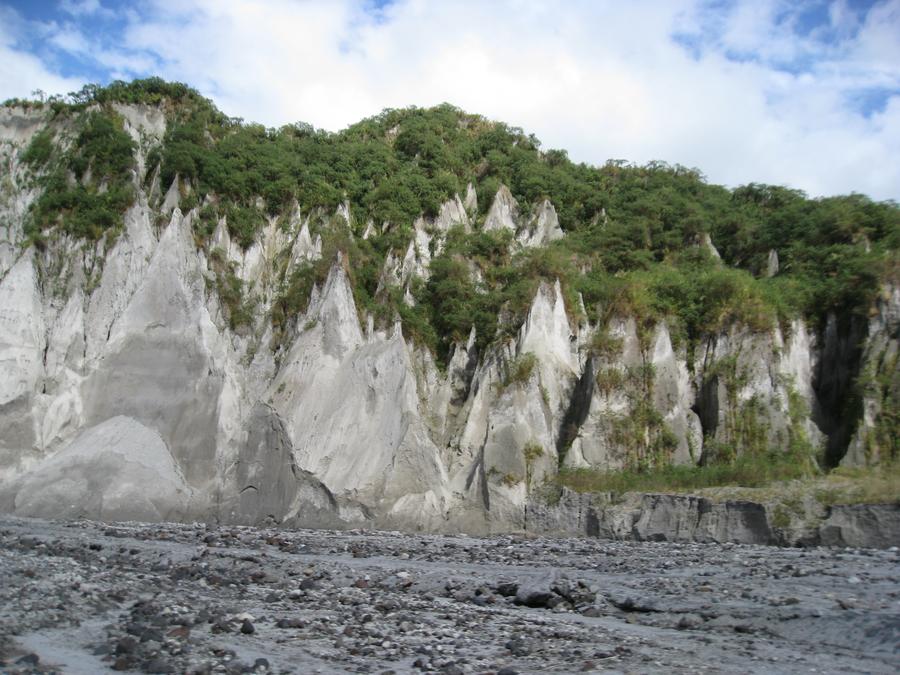 The hike with a backback of fifteen kilos was tough, but eventually we made it to the crater wall. A beautiful view greeted us: 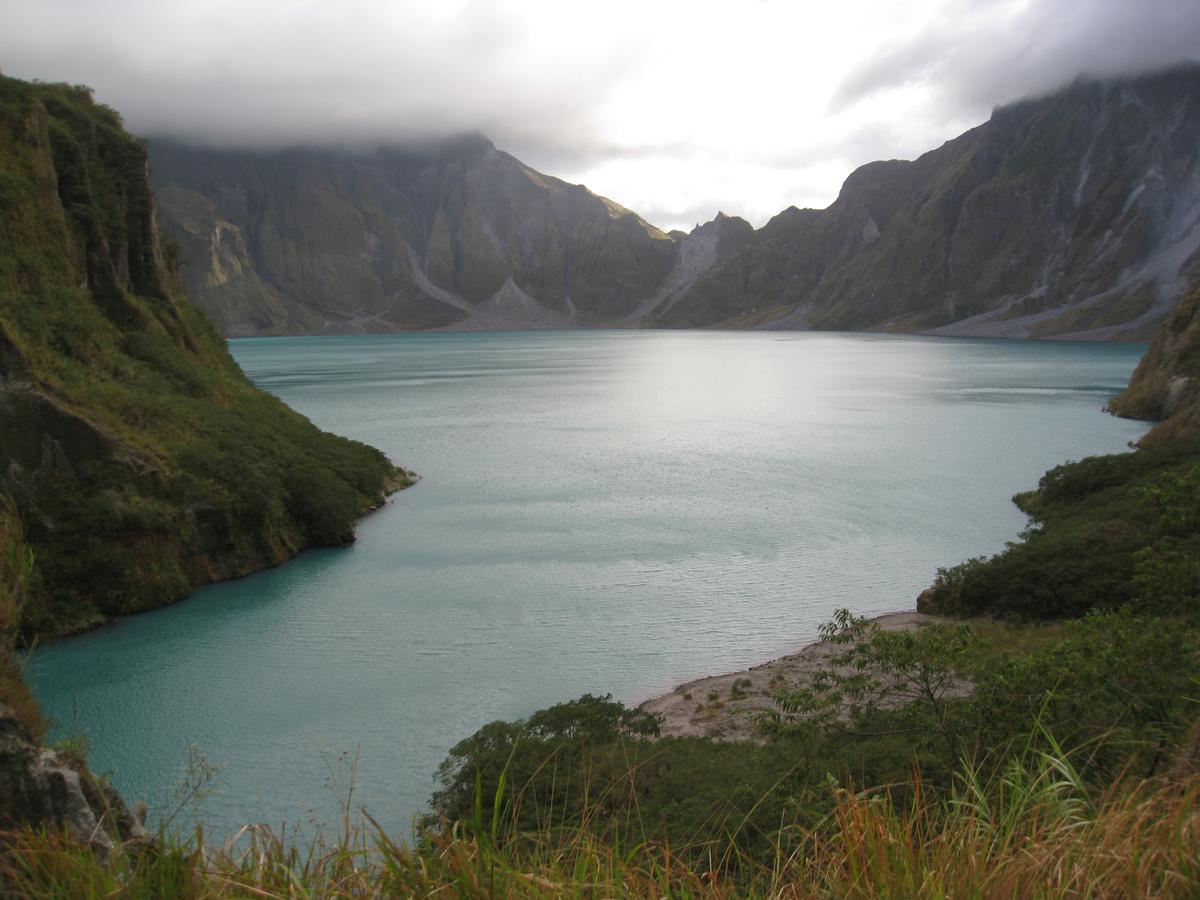 In particular, the colors in the lake and the surrounding walls were magnificent: 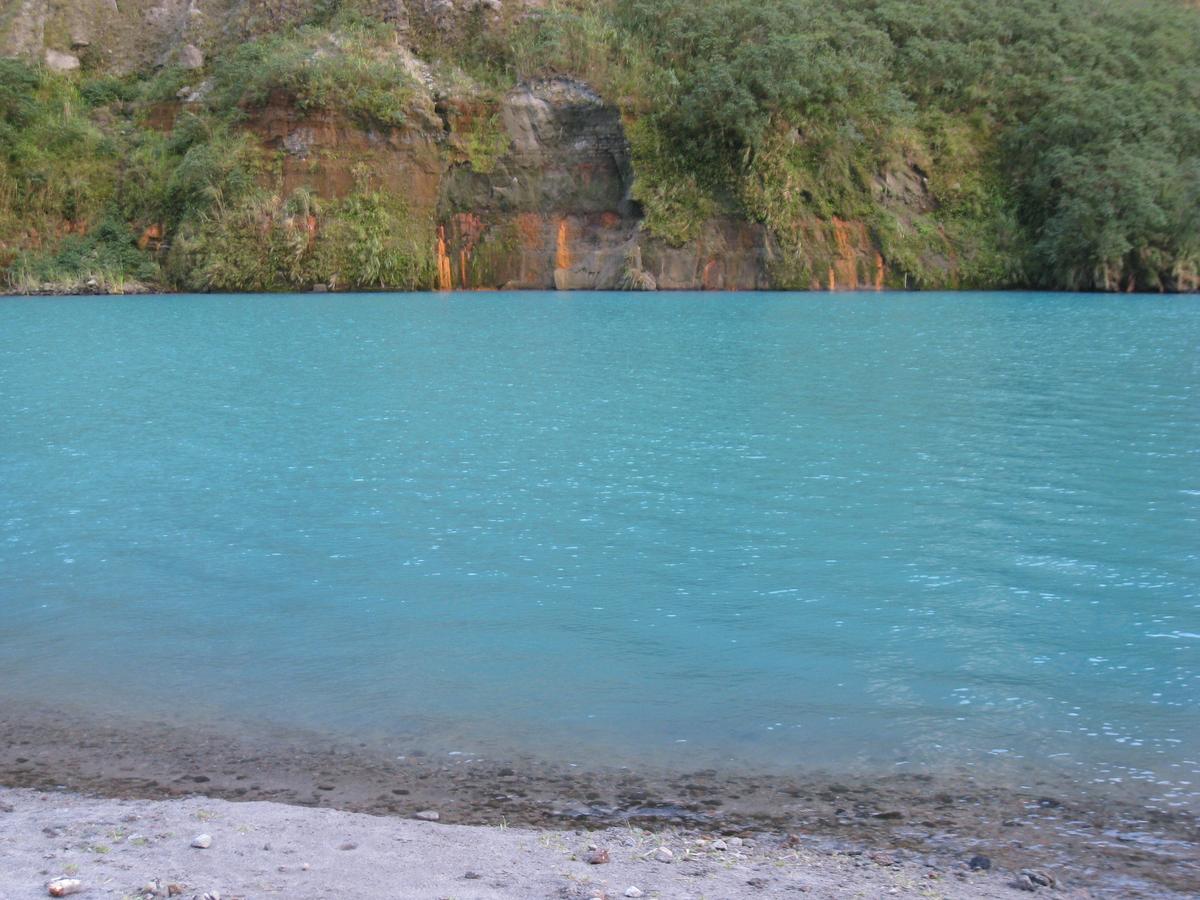 I planned to spend the night in the crater, so I had a tent with me: 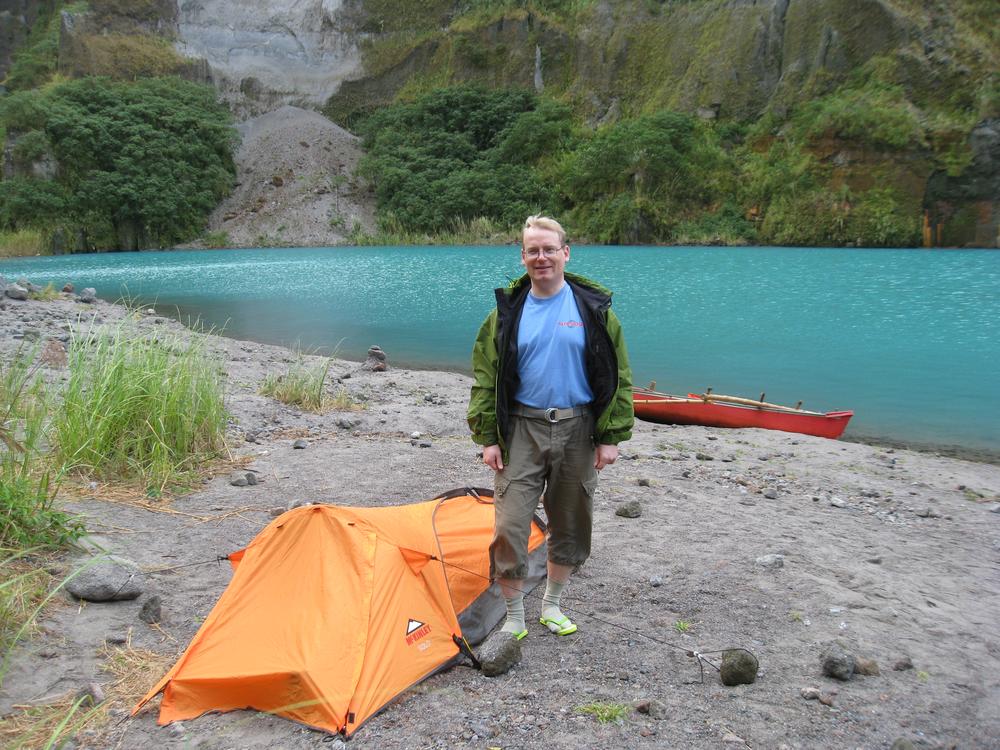 You can take a swim the crater lake. The water was pleasant, not too cold. On the other side of the lake there are places were the water is actually boiling on the shore. 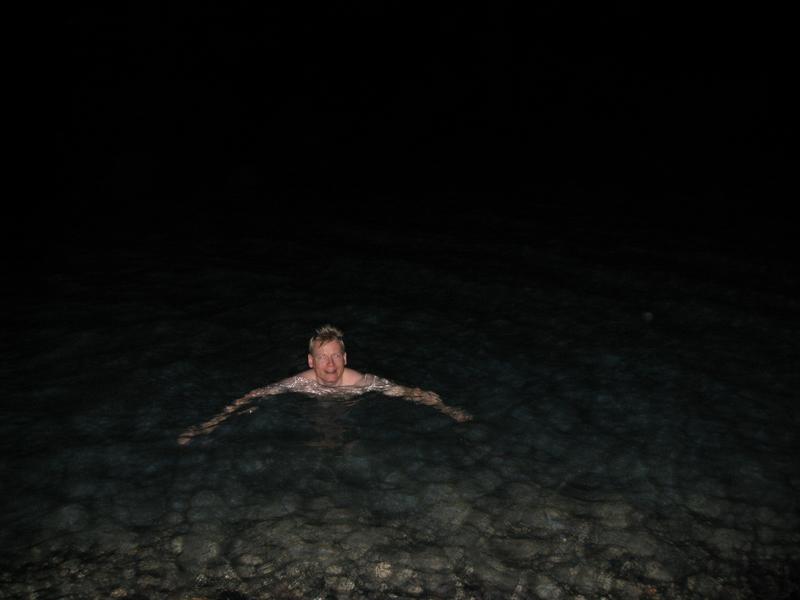 After a long and windy night, we put up a fire to warm ourselves in the morning. 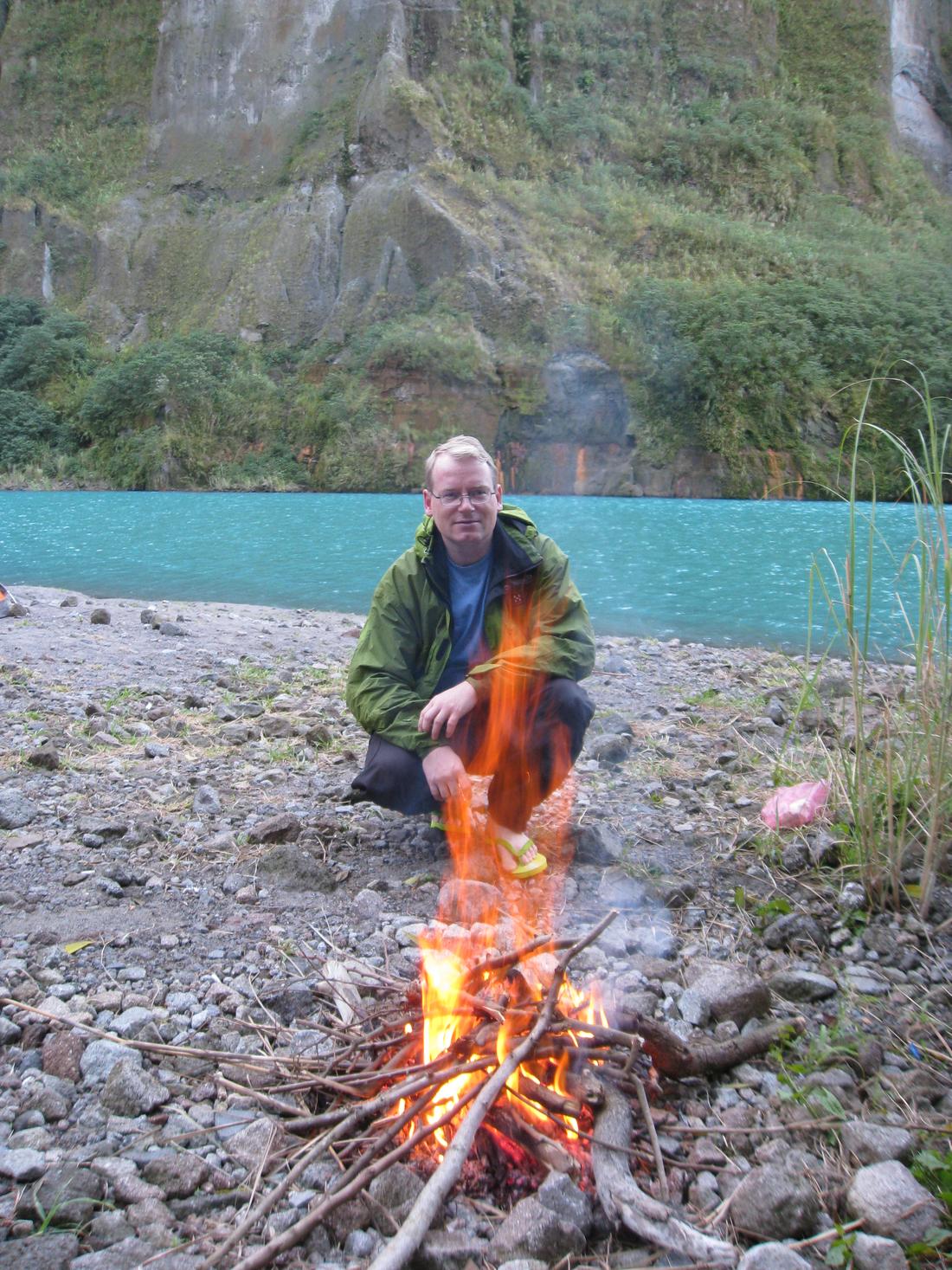 In the morning we used a small canoe to explore other parts of the lake. 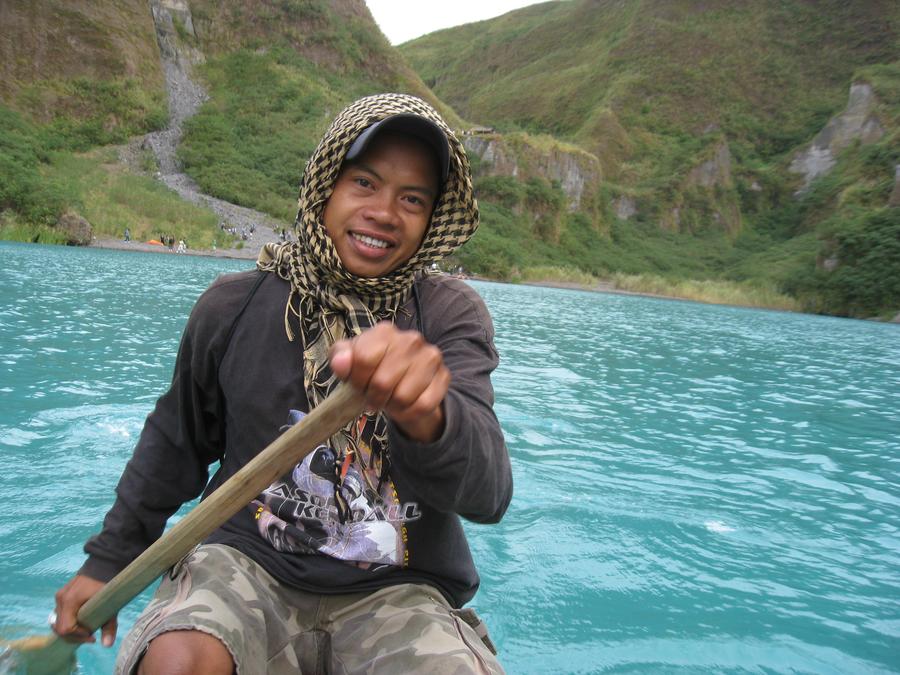 The walls of the crater are very steep, and again formed out packed sand and ash, mixed with various sizes of boulders. 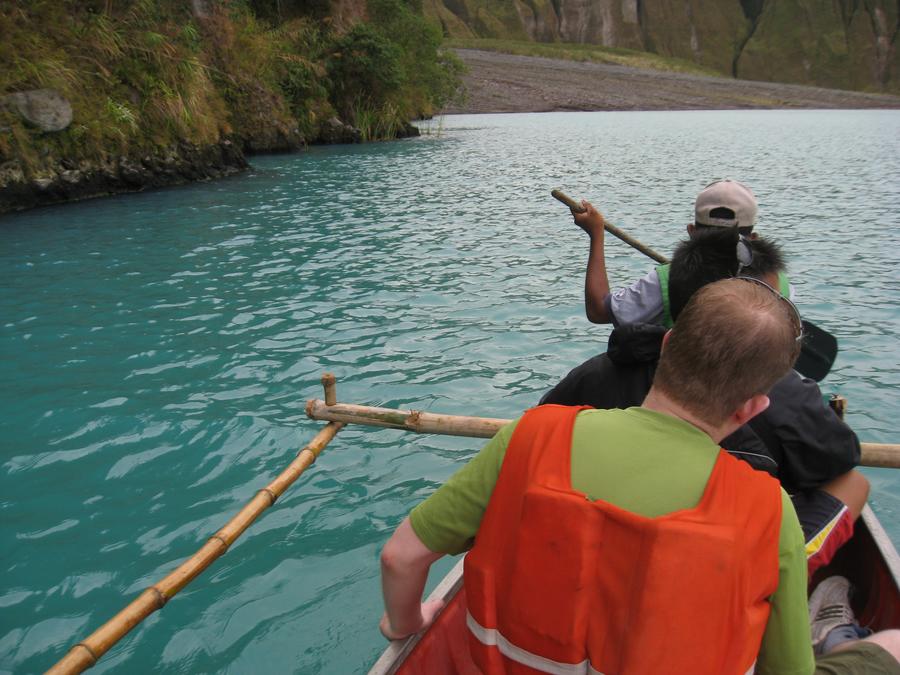 This is one of the spots where the water is boiling. 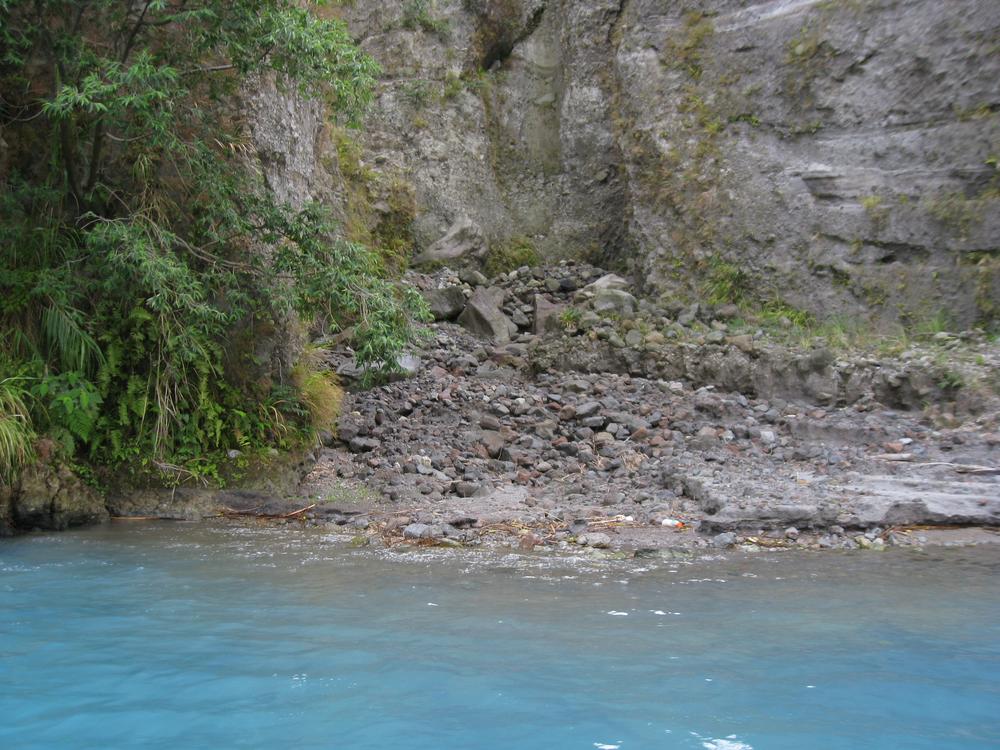 Overall, it was hard to believe that just 17 years ago this was an inferno. The crater is green, blue and silent. 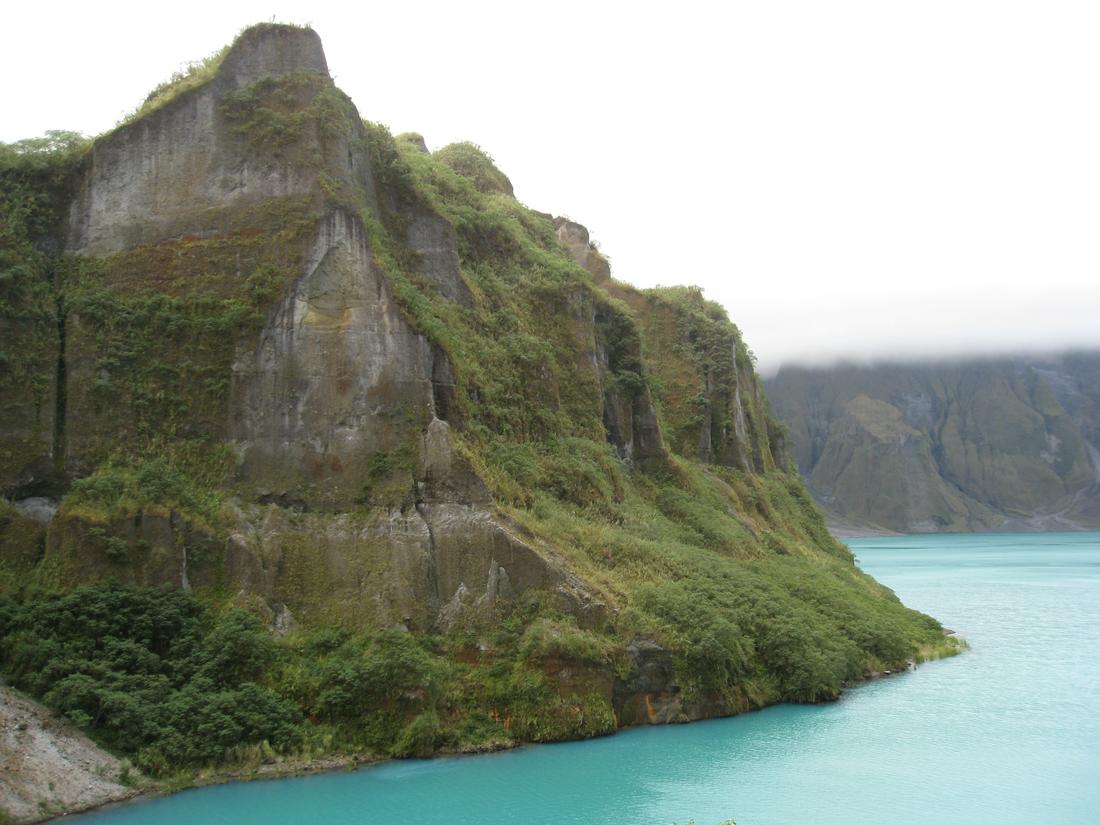 The crater seemed to have almost permanent clouds couple of hundred meters on top of the lake level, hiding the highest crater walls. This may be due to the hot steam rising from the lake. 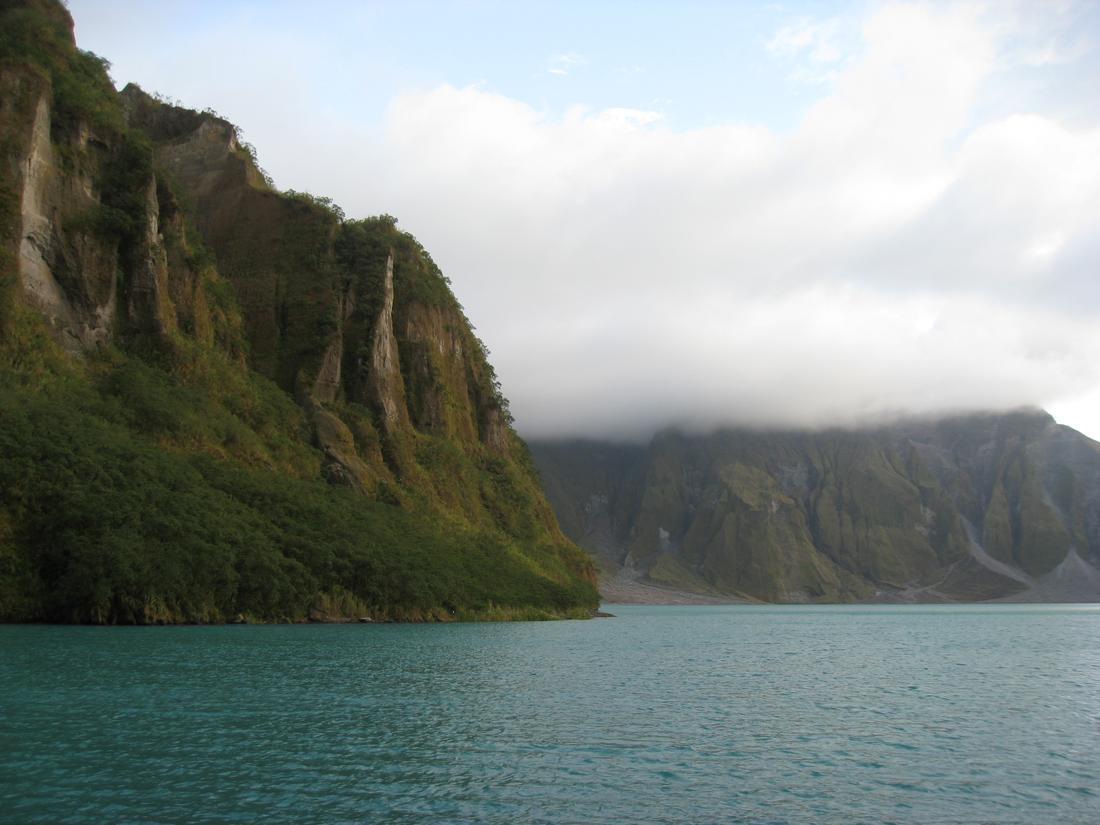 Every tourist entering the area has to have two soldiers as security guards. I'm not quite sure what dangers they were protecting us from, but all the soldiers that I met on the trip were very friendly. 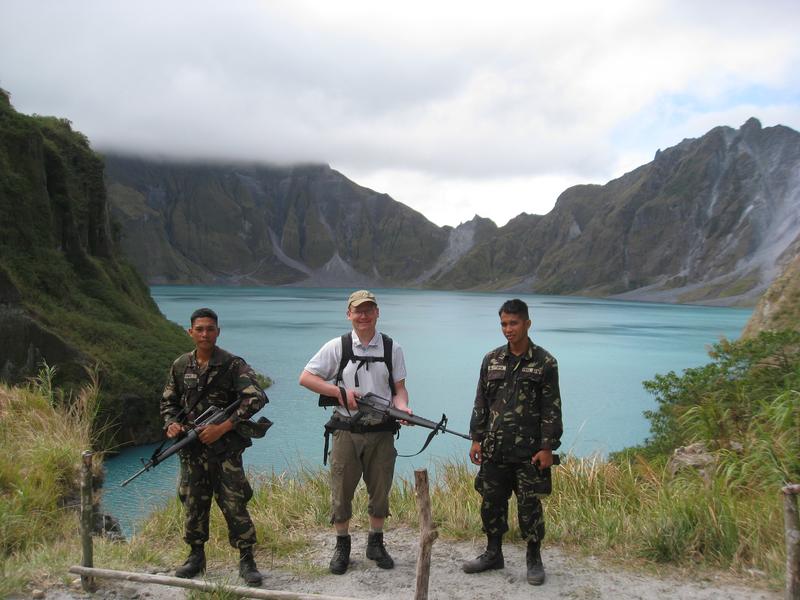 On our trip back from the crater, our 4x4 convoy had to stop for fifteen minutes as the Philippines air forces were doing a bomb run in front of us. 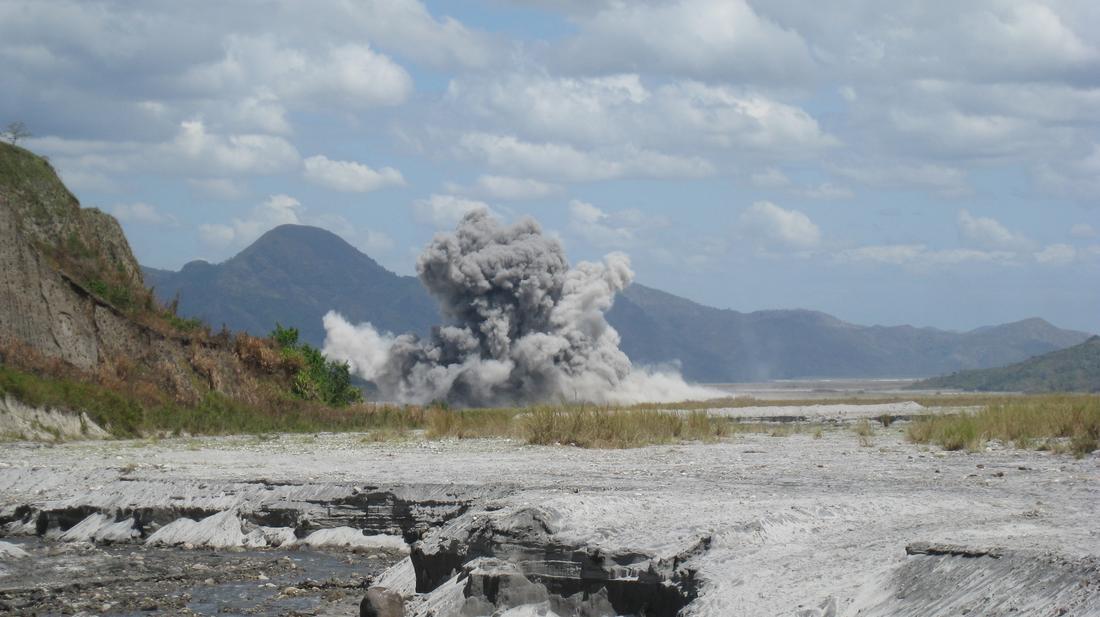 But this was not the end of the excitement... we were on the sand plains, probably doing 50 km/h when the vehicle suddenly drops on its side, and I see the back wheel run past us. The wheel has come off! 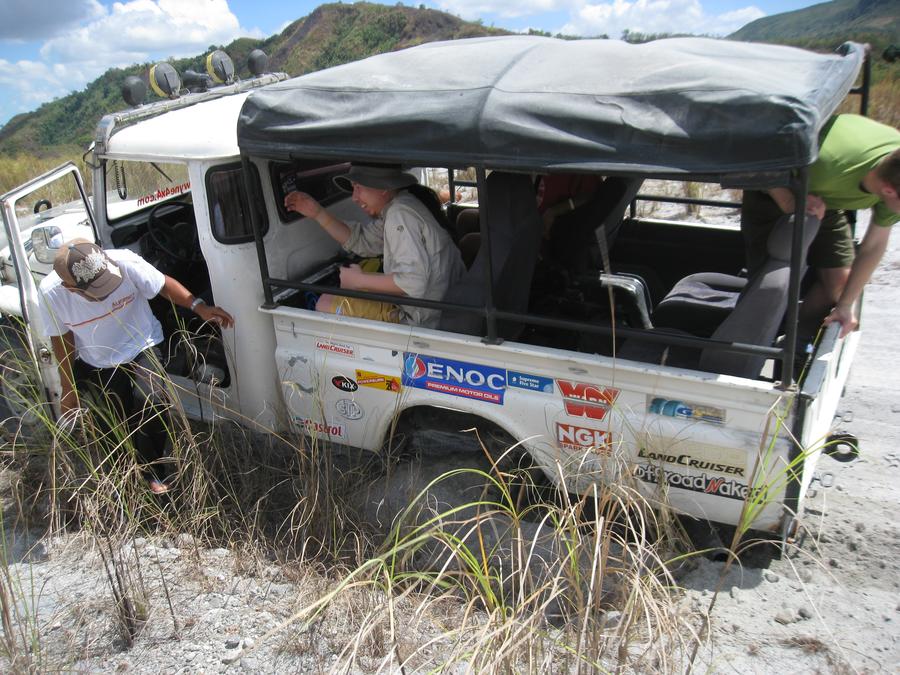 We were lucky that this happened in this place, on some of the steep mountain roads or river banks this might have caused the vehicle to turn over. That would have been dangerous. 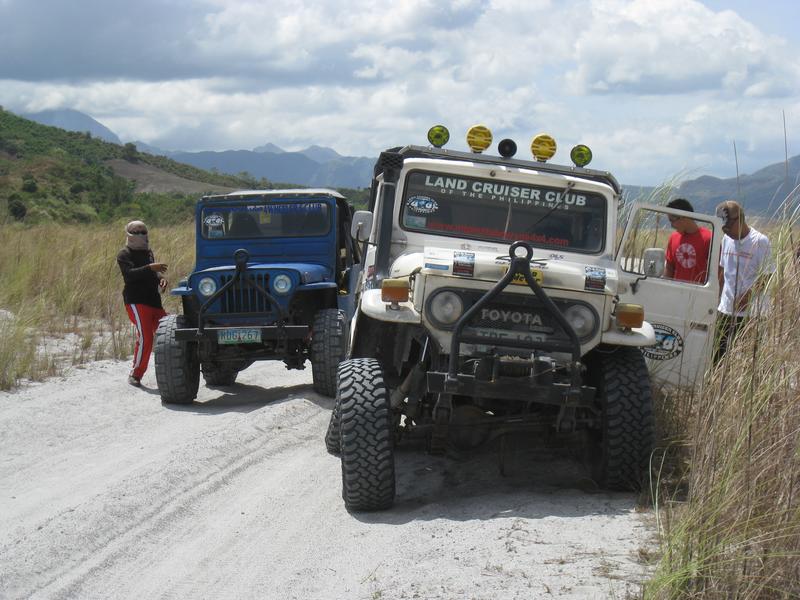 It was surprisingly hard to find the missing wheel, it took several minutes to spot it. 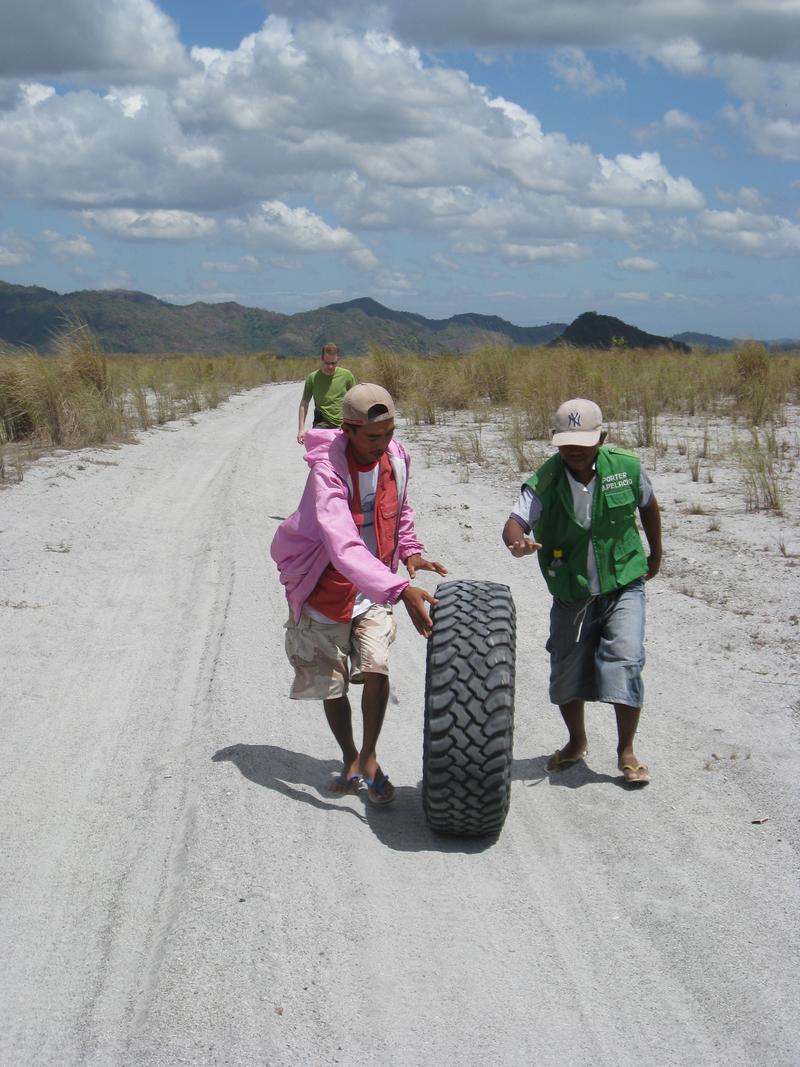 On closer investigation, the threading had come off from the bolts. The vehicle was propably used day in and day out on the same route, taking constant beating. 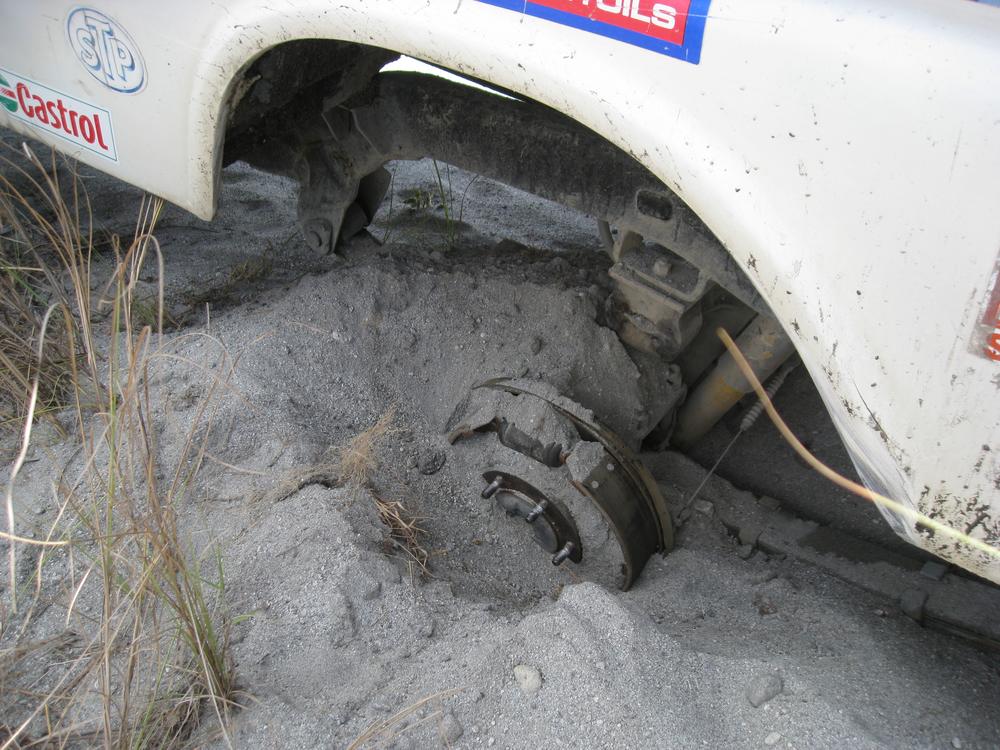 But no problem, our 11-person expedition had two vehicles, so those of us who did not have to stay with the broken car loaded ourselves on the other one and headed back. All seats in this vehicle were taken, someone was even sitting on top of the hood. 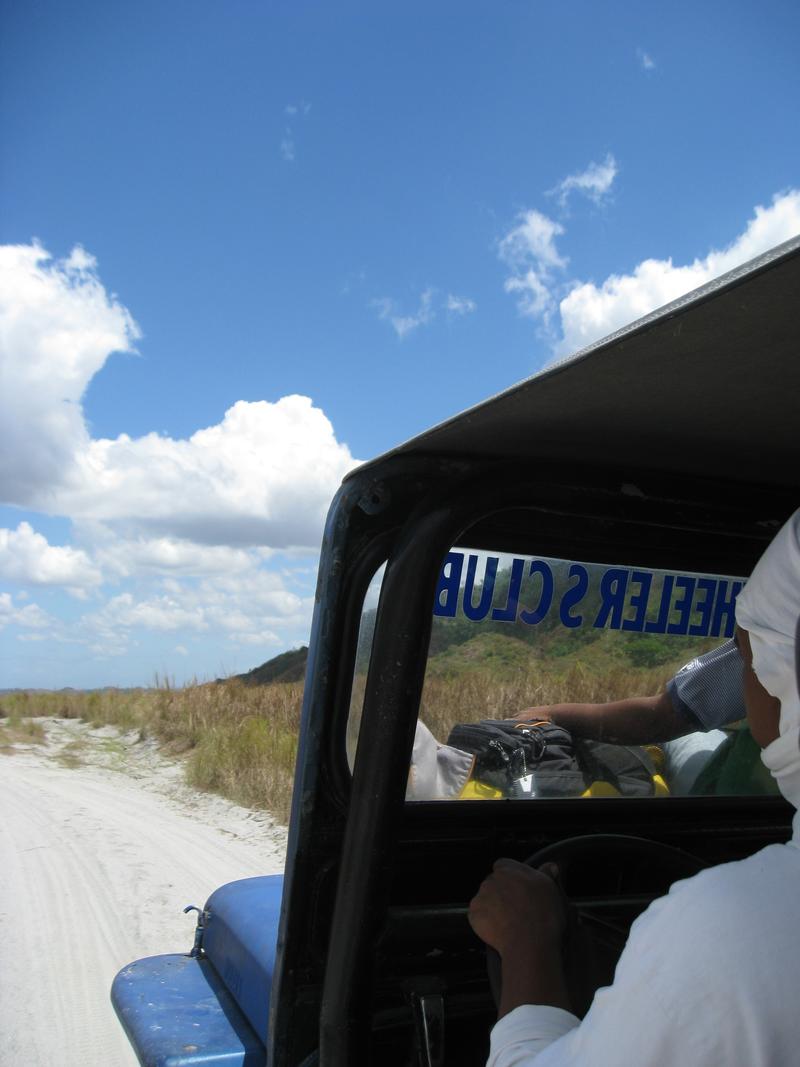