February, 2007. Its the rain season in Indonesia. I'm on a three day business trip to Nusa Dua, but I'm arriving a day early due to flight shedules and to give myself time to adjust to the timezone. When I arrive, its midnight, and I have spent the last 26 hours in an airplane. Time to rest? No, its time to unpack the luggage and pack the backpack, since the local mountain guide is coming to pick me up at 3 AM. Time to climb an active volcano, Mt. Batur in the northern part of Bali.

Arriving in Indonesia, by the way, was a bit unnerving due to signs like the one below. Hope no one is slipping anything in my pockets..

So, how come I needed a guide for this trek? Well, Mt. Batur is a few hours drive away from Nusa Dua where I was staying, it was going to be dark and I had never been there before. But I was unprepared to the number of people that were apparently needed to get me up the mountain: the English speaking guide, the driver, the union mandated mountain guide, and the Coke guy. Here are the English speaking guide and the mountain guide: 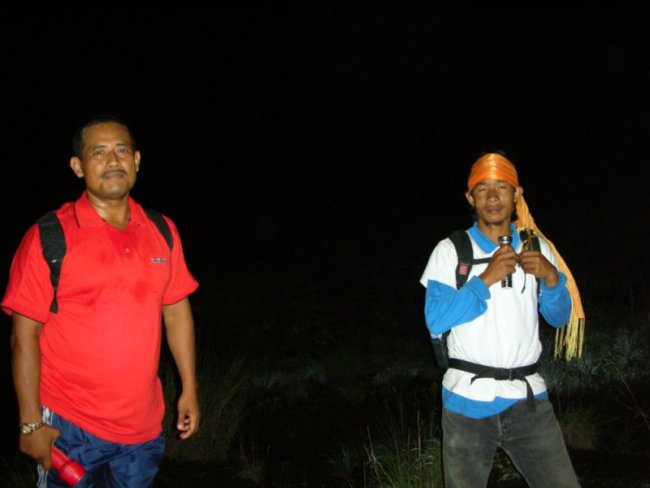 The role of the Coke guy is to tag along and sell me drinks. He climbs the entire mountain just for this, and with no guarantee that his "customer" will want to buy something. I gave him local money to the value of about US $2 and got a bottle of Coke. 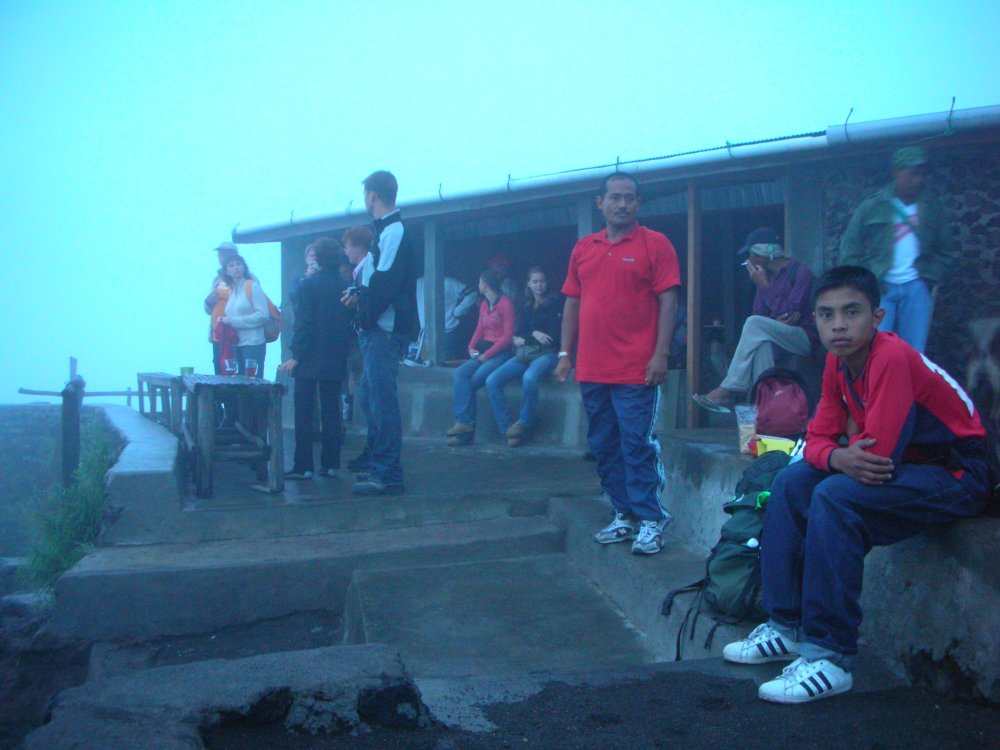 As can be seen from the above picture, the morning was hazy. We stopped at the hut before the top part of the mountain. 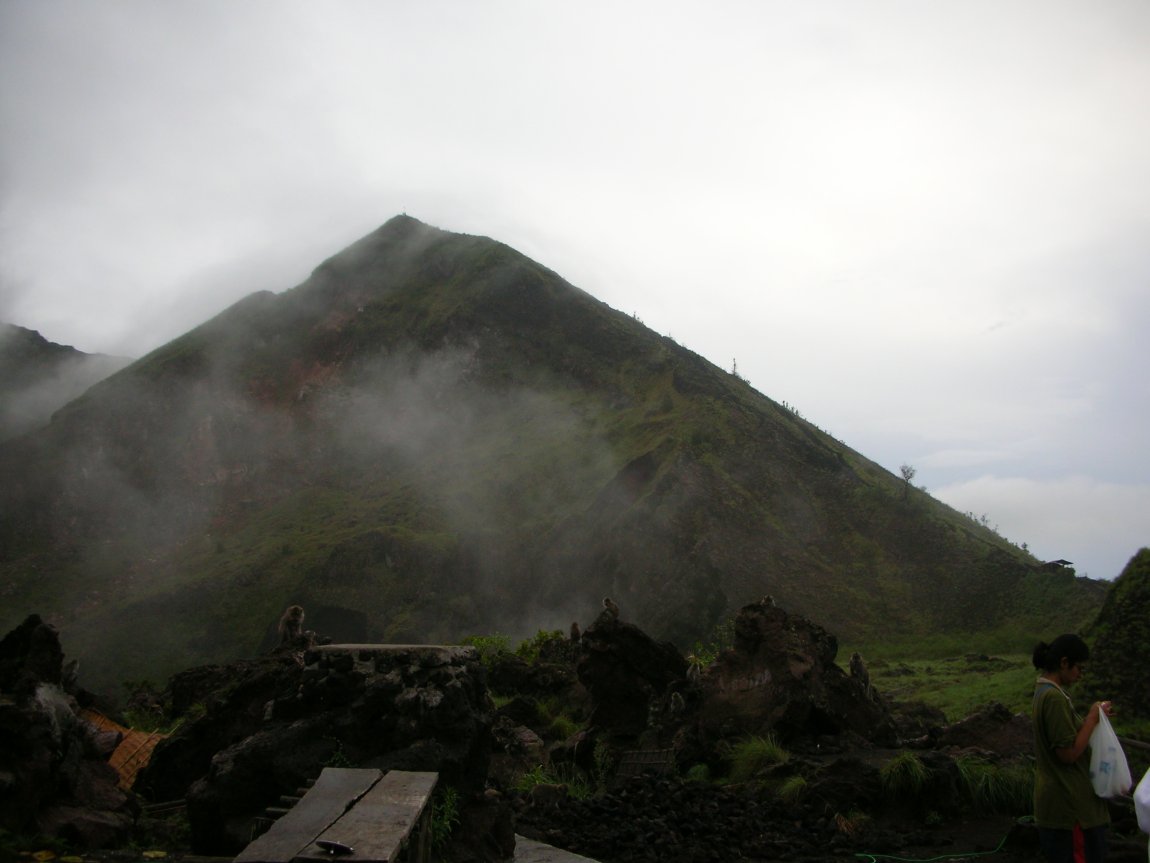 If you look at the above picture carefully, you will see small apes that live on the mountain and presumably gather around the hut to beg for food. Here's another shot that shows the ape closer up: 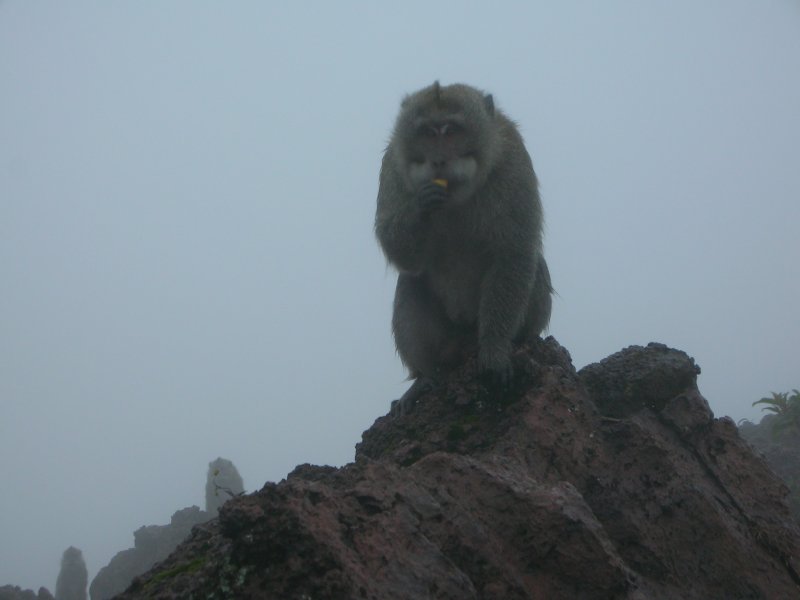 Behind the hut the main crater of Mt. Batur descends far below us. It is impossible to see the bottom, but the sides of the crater emit steam, and we can touch places in the rock where warm water drips. Guides sometimes cook eggs in the sound for their clients. There's definately still some energy in this beast... 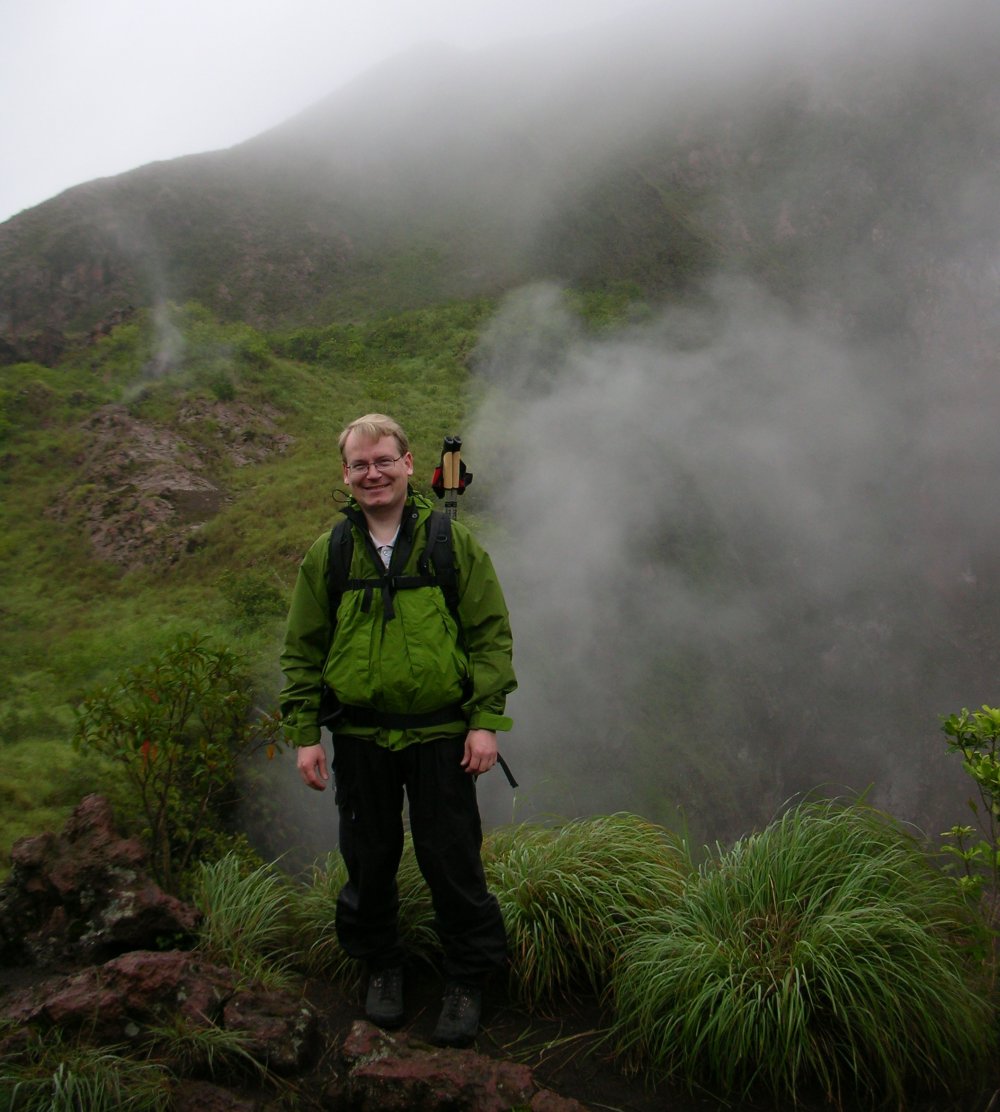 The top ridge was an interesting climb, with the crater wall falling steeply on our left side. Slightly higher up than this picture was taken the path turned into volcanic ash and sand that was not easy to walk in. 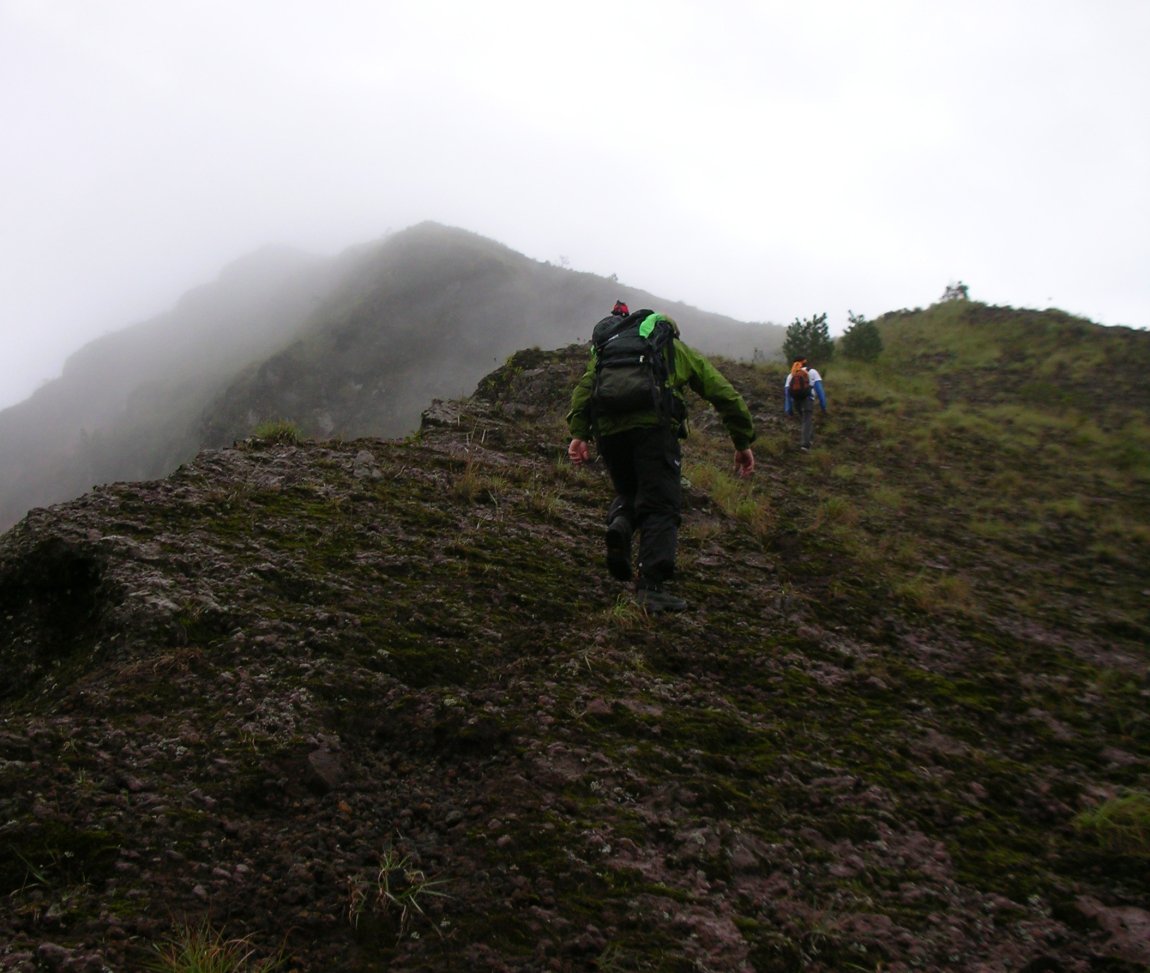 Top of the world? Naah, only 1717 meters. The climb was around 700 meters in altitude difference, and it took about four hours from us round-trip, including an hour or two of sitting around the top and the hut. But I had started much too fast, as usual, and was almost ready to turn back before the hut. Surprisingly, after some food and rest I had no problems climbing the rest of the path. 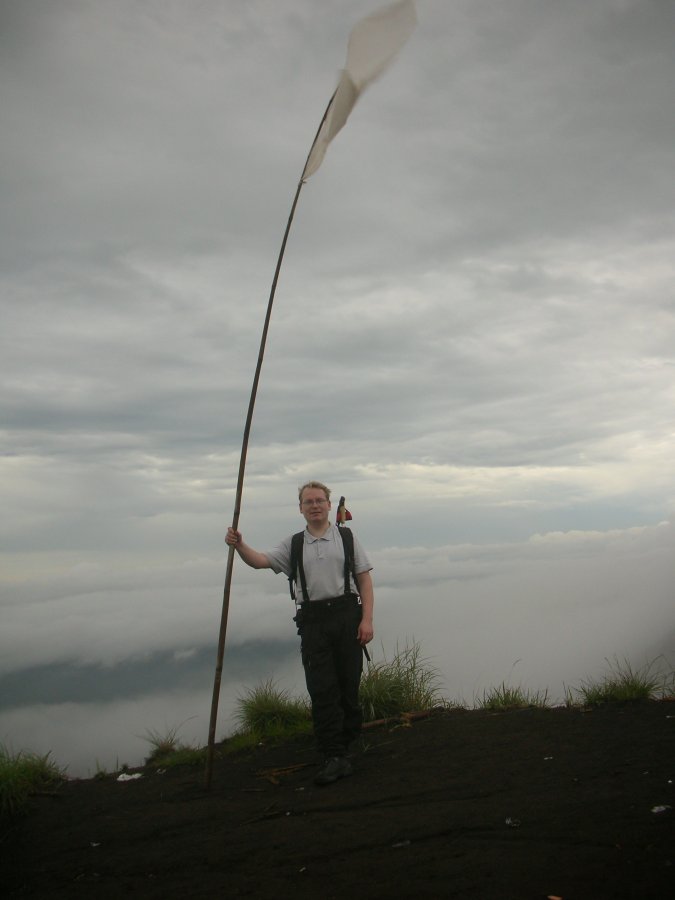 And we were not the only ones on the top. Despite signs cautioning against littering, the environment was full of garbage. 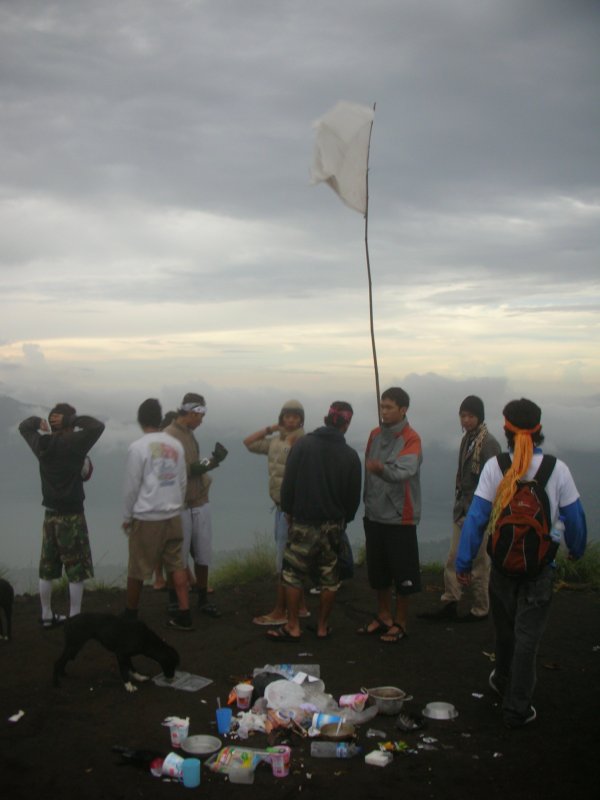 From the top we could see the Batur lake and other mountains. The one in the front is Mt. Abang, 2100 meters, and the one behind it is the highest mountain in Bali, Mt. Agung. Mt. Batur is actually in the middle of a vast ancient crater over 10 kilometers across. The crater rim is visible around us, and Lake Batur covers the lowest part of it. When this supervolcano erupts for the next time, it will be very interesting for everyone on the planet... 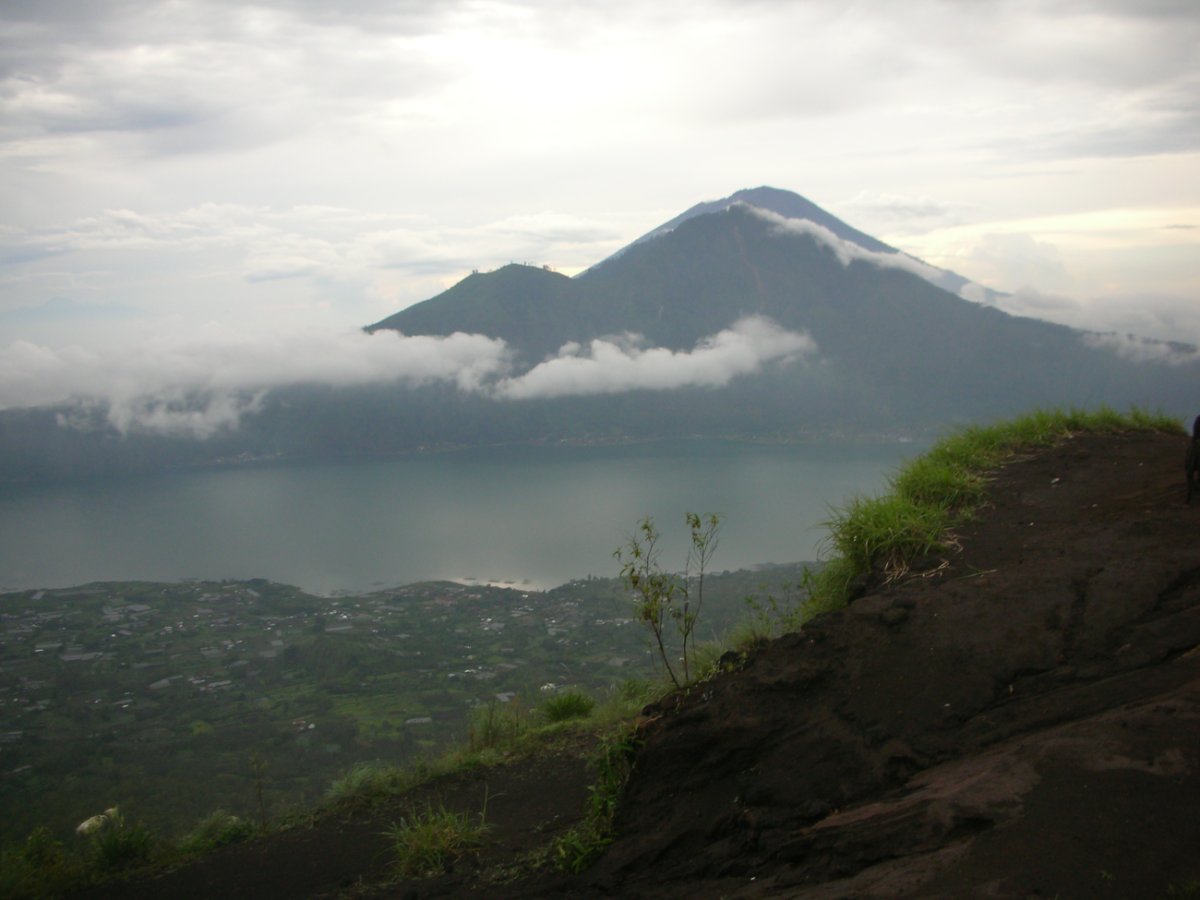 On the walk down, I used my walking sticks to make things a bit easier on my knees. The main problem in coming down was, however, the mosquitos that kept attempting to bite me, despite liberal application of insect repellent. And this area has Malaria and Dengue fever... luckily it turned out that I did not get either one. 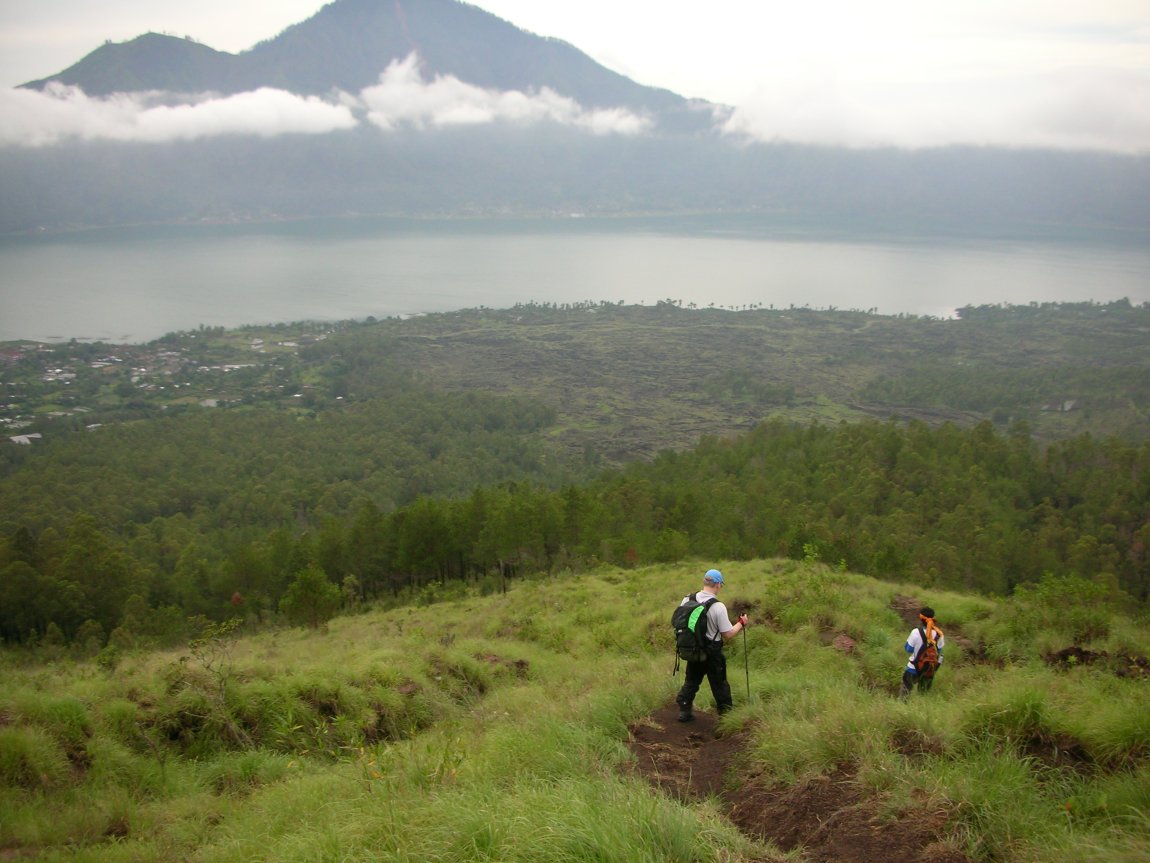 On the way down we see the life of the local residents, such as this house where a family lives, at least temporarily when they work in their garden on the slopes of the volcano. 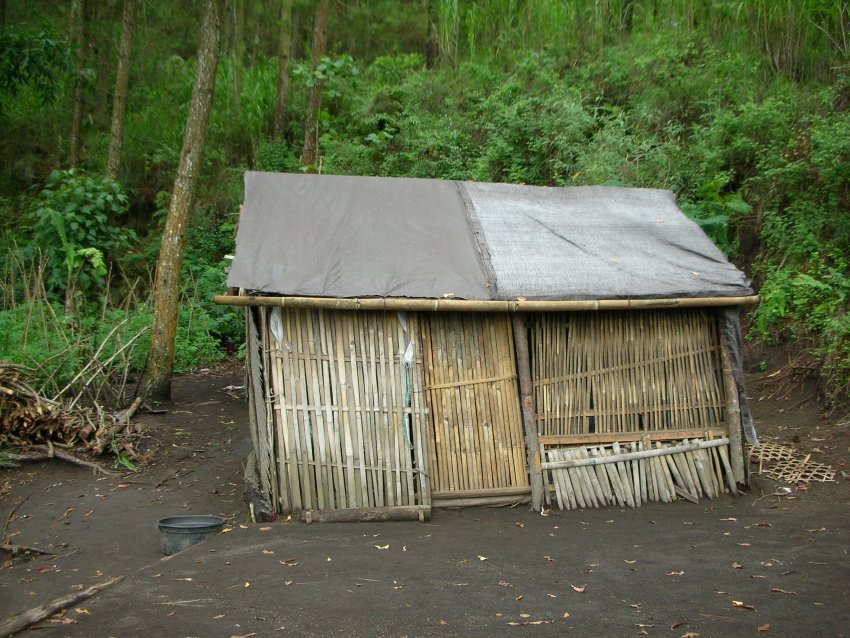 And there must have been at least twenty temples on the way down! 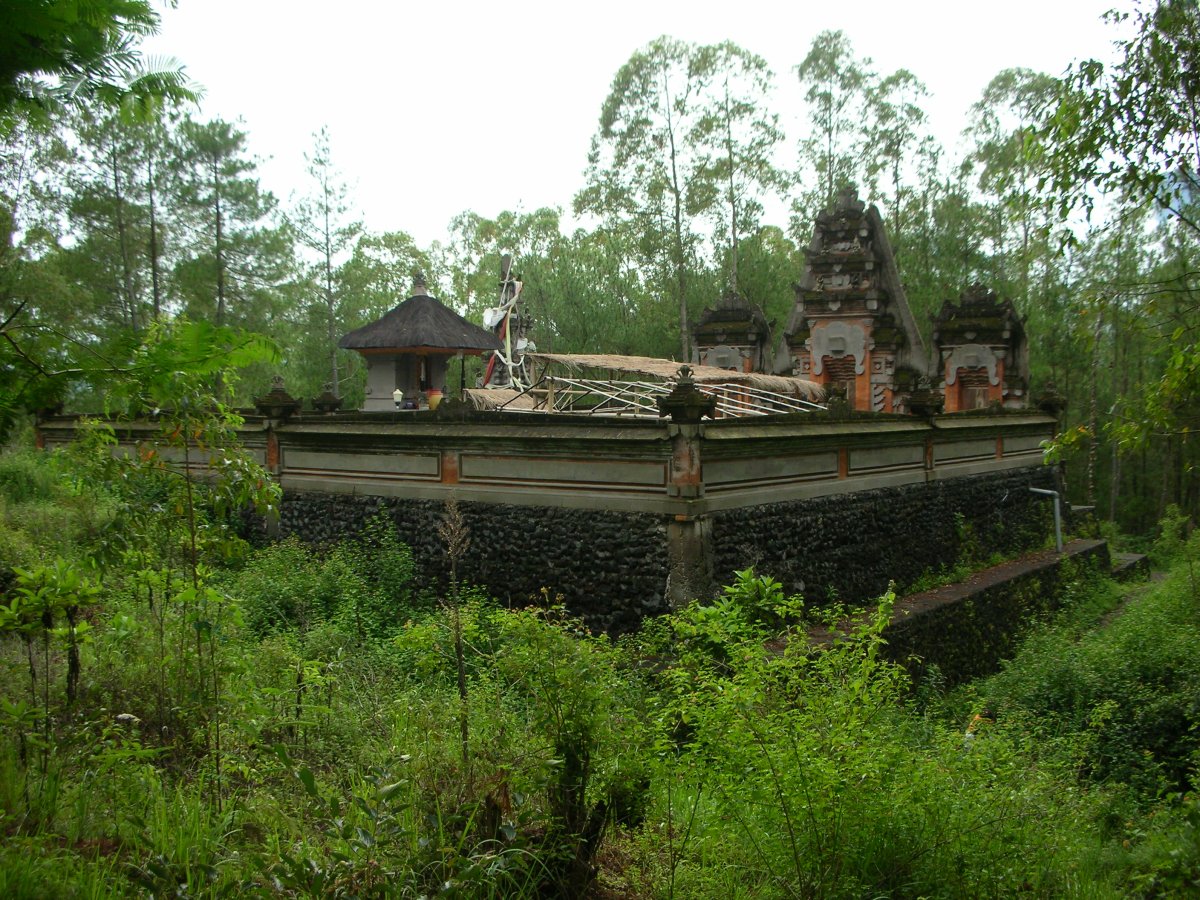 When we finally reached the lakeshore we had the opportunity to relax in the natural hot springs at this nice hotel. Mt. Batur looms above. 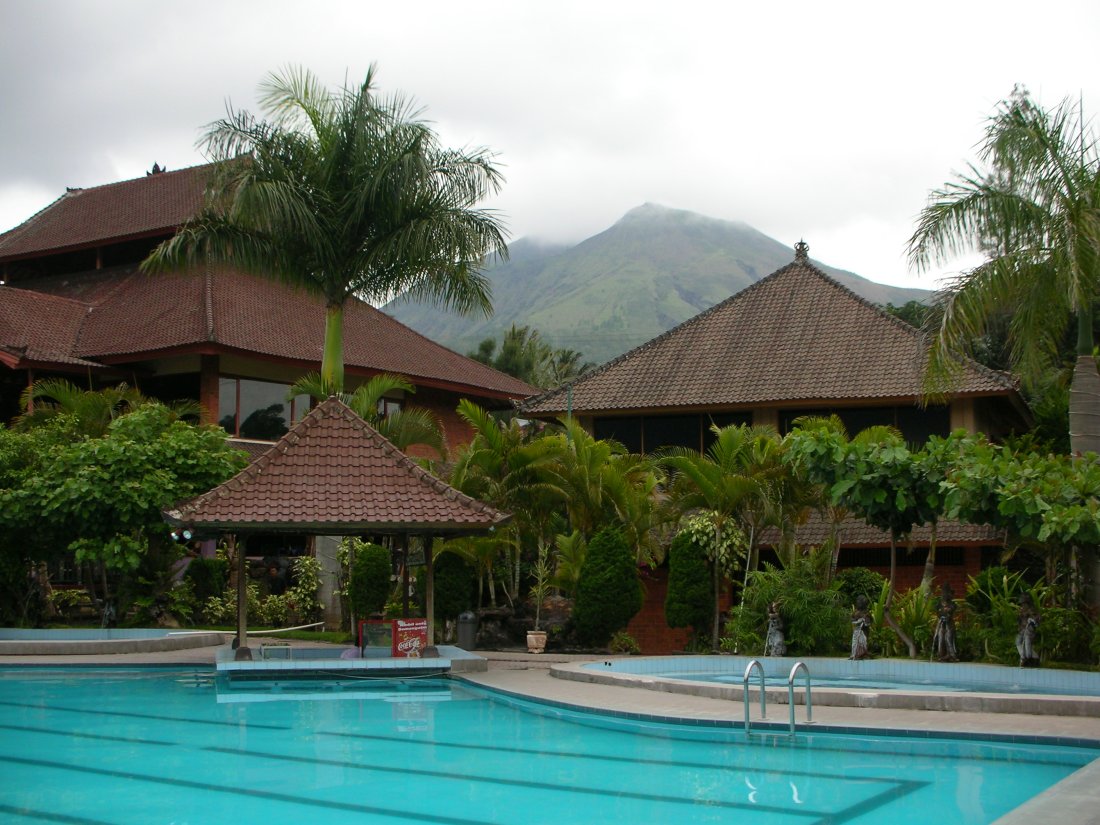 On the way back to Nusa Dua, we also stopped to admire this rice plantation. 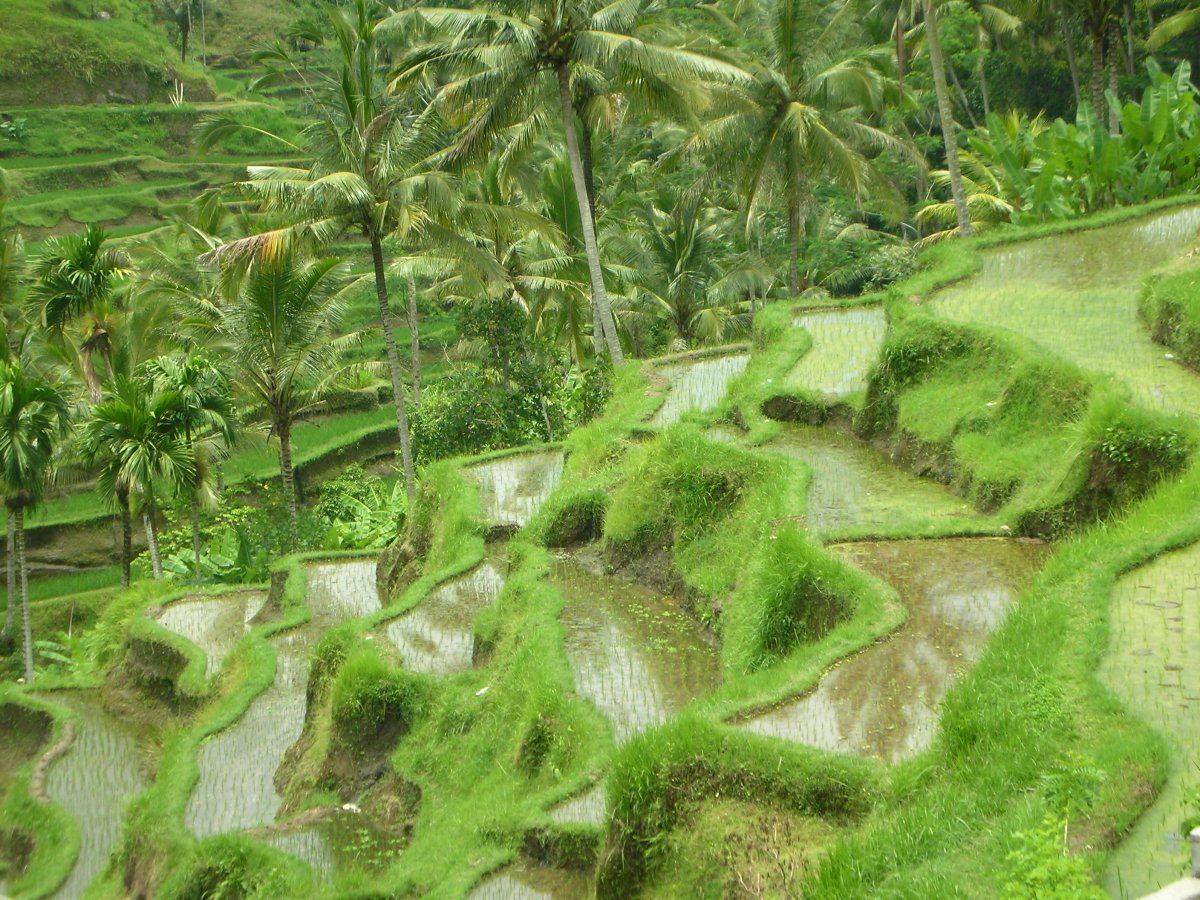 And this shopping mall in Ubud, the cultural and trade center in Bali. 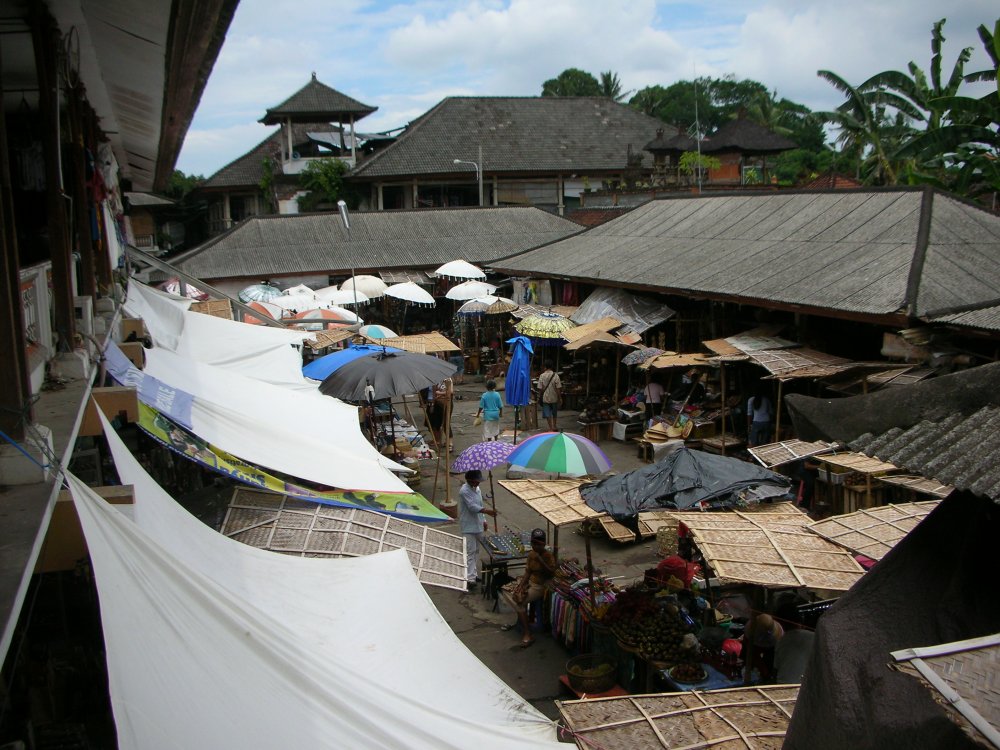 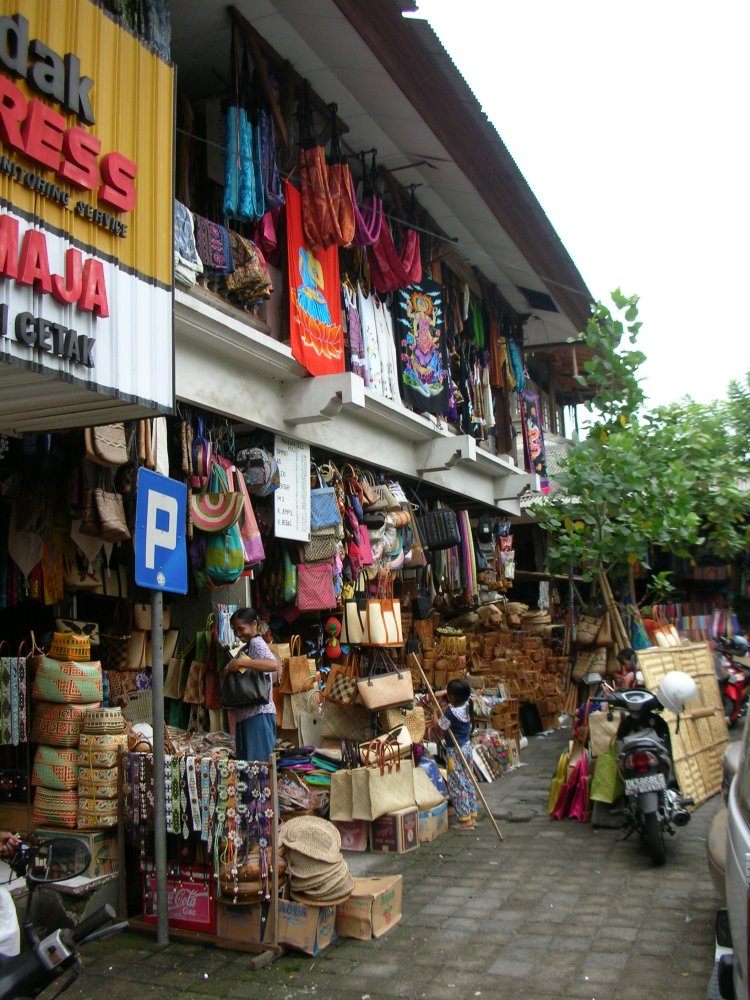 Was the trip worth it? It was pretty interesting for me at least. No red stuff visible, as a climbing mountain it was rather mellow. I was still exhausted from the climb and got painful blisters on both of my feet. But it was clearly a mountain still full of volcanic potential, and the apes, local culture, and great views added to the interest. The guide agency that I used was Santa Bali, if anyone is interested in repeating this exercise, and the route we used started from Pura Jati, at the guide office and ended in Toya Bungkah. Bali also has other options for climbing volcanoes. On Mt. Batur, you can tour the top ridge and come down through another way. A little bit further away is also Mt. Agung, the 3100-meter highest peak in Bali, also recently active volcano.